A simple and tasty Mexican food restaurant, like there are so few in Paris. It’s cheap ( except for the beers) and recommended by Mexicans. The other plus is that it’s in the Grands Boulevard area, which is lacking in good spots to eat at. 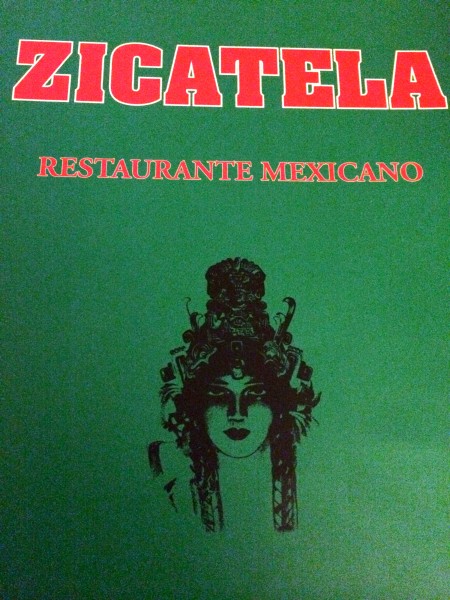 I was at Nuba and I was talking with the bartender, she was of Mexican descent, and I was sharing my sorrows about the lack of good Mexican restaurants in Paris. She tells me that there’s one she loved, that is delicious, cheap, and with good service.

I’d never noticed it even though it’s been open since 2003 I think. It’s located on Geoffroy Marie St, which is actually pretty quiet. It’s easy to be on Faubourg Montmartre St. and miss it, which is unfortunate because there aren’t that many good spots around it, “c’est du vite fait qui capte les banlieusards en goguette” ; so here’s a good reason to know Zicatela. 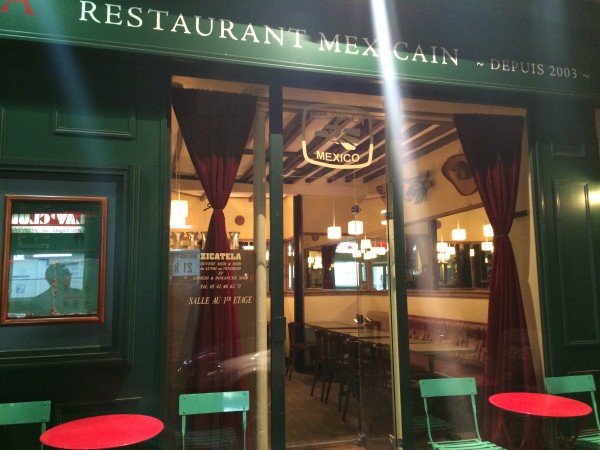 The room on the ground floor is pretty limited, so it’s preferable to go upstairs. It isn’t large either, but it’s more comfortable. 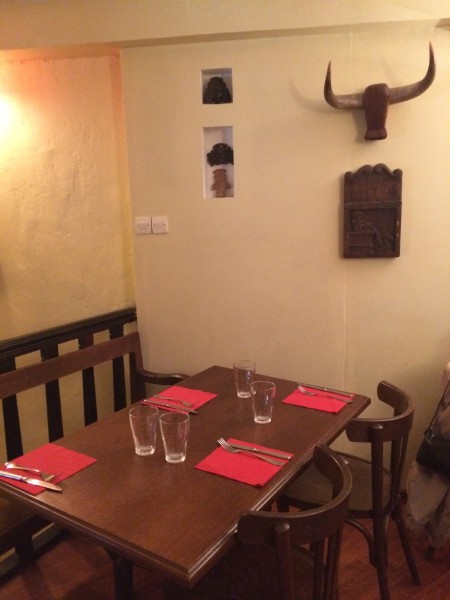 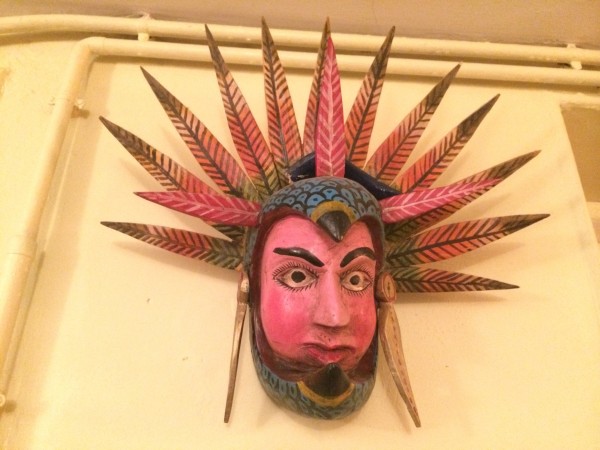 There was a Mexican waiter, a Columbian waitress and a chef from Bengal!, that was the funniest because he looked like a Mexican, so when I went to talk to him in Spanish and I was told: “no, he only speaks English”, I thought they were kidding.
From Bengal or not, he cooks Mexican food. I mentioned that the enchilada was very good, but that the frijoles ( red beans) weren’t very warm, both the waiter and chef seemed to care and told me they would pay better attention.
When I called ahead to make a reservation, I got a very welcoming man on the phone, and so I was surprised when no one seemed “tilter” when we arrived. It was actually the boss that we got over the phone: he was at Biarritz and transferred the message to his employees, at least we can tell he’s keeping tabs on his business, it’s a good sign. 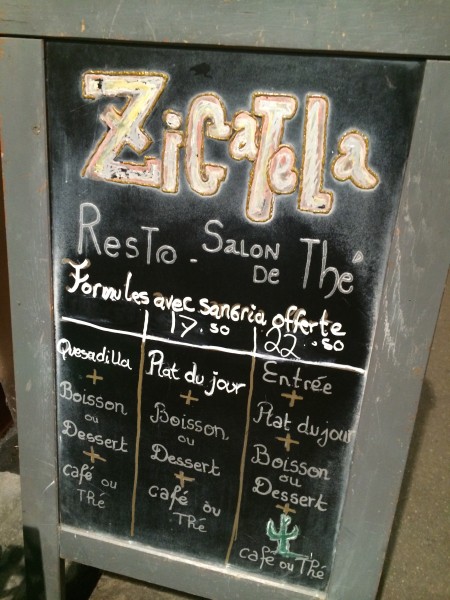 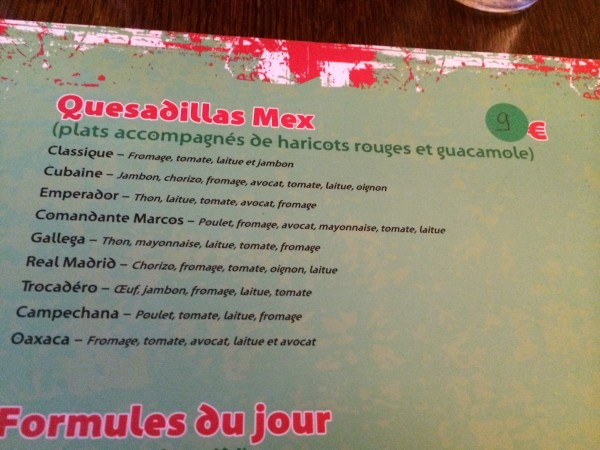 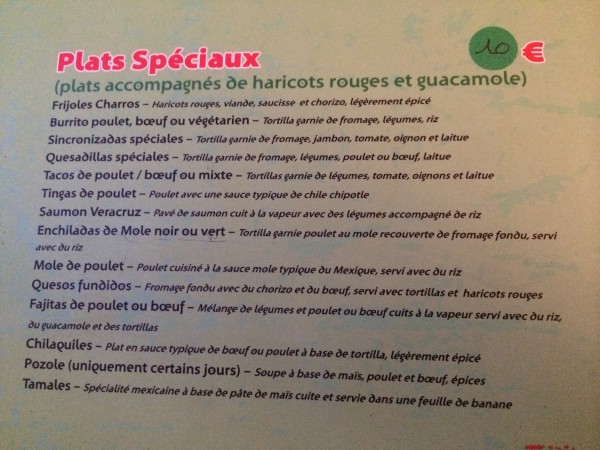 I decided to let the waiter choose a dish that he liked for me. He went for an enchilada served with a mole sauce, either black ( chocolate) or green, which is spicier. He preferred the green one, worked out well, because so do I.

10 euros is the right price for this invigorating dish, the enchilada was served hot and wasn’t dry at all, I really enjoyed eating it, an authentic taste, enough chicken in it. Good!

As I was saying before, for these types of dishes, it’s important that all the side dishes be in tune with the dishes, in this case it was alright, except for the beans that I wished were as invigorating as the enchiladas (hotter!). 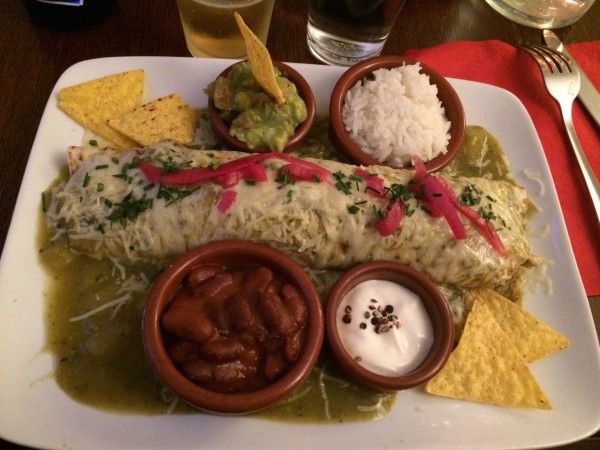 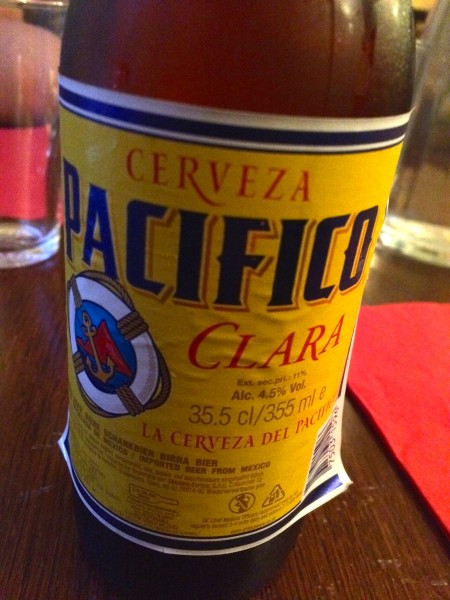 A good spot to know, with out any pretense, but efficient and tasty ( there are other dishes that need to be tried) and a good quality-ratio price.