Dj Nomad aka Hans has grown up in Germany, surrounded by a mix of cultures. The 1st record he bought was “Parallell Lines” by Blondie, maybe a premonitory title when you know how many bridges he will build later, between the Afro-Caribean, Latin & Tropical grooves and the electronic beats culture in general. It’s also no surprising that he quickly moved from the original italo-disco to the Afro/Cosmic Disco fusion, promoted by djs such as Beppe Loda. Honestly, I share one point with Dj Nomad, we love music and that’s it. The music selection on 716 is as wide as Dj Nomad’s musical tastes.

He is reknown among other crate diggers as one of the most knowledgeable djs when it comes to African & Tropical music, and especially Western African music; partly because he didn’t start to dig it 8 years ago when it started to become hype again (it was already in the 70/80’s). Lately, his Africaine 808 project, alongside with Dirk Leyers (who did the Closer Musik with Mathias Aguayo), became so popular that if you haven’t heard of Dj Nomad yet, you’ll surely have of Africaine 808. His Vulkandance parties in Berlin (but also a record label) became THE reference when it comes to electropical raving party; yes this is another one of his specificities, when he’s playing as a dj, he knows how to evolve from old school African music to pure techno. When you have more and more djs playing tropical electronic beats, it remains very rare to meet people who are comfortable with both; a bit like in the early 90’s, when it was so rare to have someone who loves house as much as hip hop. Nowadays the musical frontiers tend to fade away, but still, dj’s usually dont play soukouss and techno the same night. Ah, last but not least, once he is on the desks, he is like a machine and can play for hours. 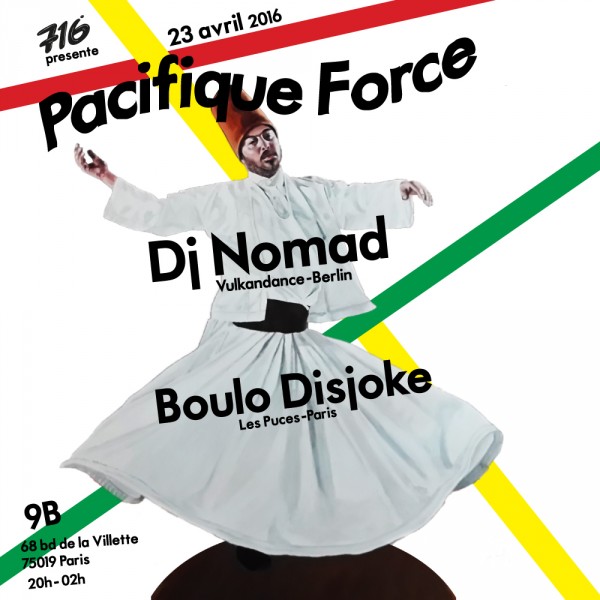 He’ll play at the first 716 Party ever (after 9 years of existence), alongside with the French record seller and dj, Boulo Disjoké, and this is something big. For the occasion, both have recorded a special mix. Boulo Disjoké has made a mix dedicated to the Afro-Caribbean music that was played in the African bars and restaurants in Paris in the 70/80’s.

Dj Nomad’s selection is like a compilation about the Cameroonian Diaspora in Paris in the 80’s :  100% Cameroonian Modern Soul + Disco, Parisian production. We can say that the African scene from that time in Paname (nickname from Paris) has been well represented here. Dig it here and come saturday in Paris at le 9B to hear this guy live, free entrance, 8PM-2AM, the rest is history.

To illustrate this mix, we wanted to use a photo from that era. It was hard to find some in google, until I discovered the amazing work of Bill Akwa Betoté who covered all this scene during twenty years. His work is a unique and exceptional testimony about this scene that has been a cornerstone in the musical and cultural life in Paris. What was happening in Paris at the time was having an influence abroad, some foreigners had their first contact with African music in Paris. Have a look at these photos from Bill they speak by themselves and don’t tell me you don’t want to just travel in time and dance with those people right now. I choose a photo from Princess Erika because the shot is off the hook and she is originally from Cameroon.