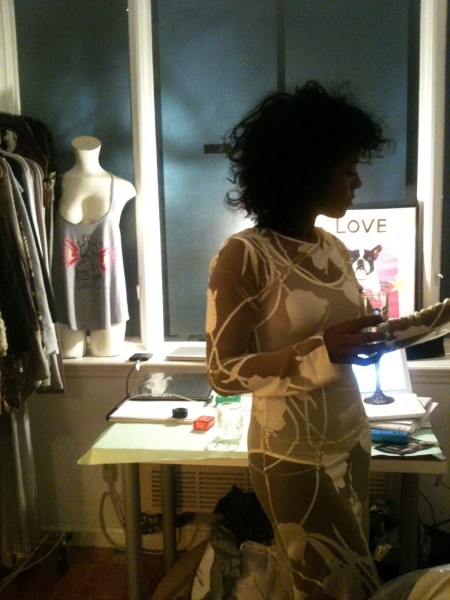 I have discovered Bobbi Dahl on Hartzine with this video. I had been immediately seduced by the track and her personnality. She is creative & kinky.
Here is her playlist, top quality music and largely argumented.

1) Bobbi Dahl
a) Black Magic 9000
This is the first complete song that I wrote and still a favorite. It’s talking about how juicy I am, how utterly unmarriable I am, and how quickly I’ll leave my current mate for a new one. Ridiculous, right?! Glad I got all of that off of my chest early in the game. Talk of praying mantis-style relations and romantic wrestling? Truly an ode to my black magic.

b) Comfort Slave
One night around 3am, I was strolling HypeM for instrumentals – as I was wont to do when bored and/or champagned to the gills – when I came across this killer track from Teams. I literally heard the first five seconds, clicked download, opened Garageband, and raged for four minutes. I was a girl in love who had wronged and been wronged by her lover and apparently I had a few things to say about the fall of our relationship. I was angry, I was defiant, but I was still his Comfort Slave. After recording, I sent it off to Teams on a whim – a decision that singlehandedly changed my life. Much love to Sean Bowie, forever. And also my cad ex.

c) Come, Watch
This, the second song I ever wrote – also by Mark Sevé Evans, a secondary school friend and musical god – is a tribute to all those who go over the edge night after night with the precision of a gold medal winning high diver; those who have hit rock bottom and bloody like the way it feels. Not that that’s me or anything. If you recognize the spoken verses at the beginning, kudos, I’ll see you at the next meeting.

2) Co La – Egyptian Peaches
Somewhere there’s a version of this song with me dreamily scatting Caribbean patois. It flies me to the islands and I can’t wait to put it in my ears next time I’m there. The first time I heard it I rang up a boy in Barbados who I hadn’t spoken to in a while but was suddenly willing to barter some late night conversation for a plane ticket. This song is golden. New gold though, that I hope will stay with me forever. Even more, I’d love to be doing music like this, with a straw in a coconut and mango juice pooling at my feet. Co La, call me.

3) Lil Kim – Queen [email protected]#$H
If you know me at all you know how much I adore Kim and for me this song is the pinnacle of why she’s the best to ever ever do it. She spits such heat. And yes, I KNOW, Biggie wrote the verses. BUT what bitch do YOU know that could deliver like she did? Anytime I’m feeling anything less than SUPA OVAH, I blast this and all I have to hear is “I am a diamond cluster hustler, queen bitch, supreme bitch, kill a nigga for my nigga, by any means bitch, murder scene bitch, clean bitch, disease free bitch check it,” AND I’M BACK AT THE BAD BICH BIZNESS. Plus when she says “I used to wear Moschino, but every bitch got it,” that’s so fucking me back in those days. Putting that Moschino down because alll the girls were tryna rockkkk it. Thank you, mother Kim.

4) Lil Kim – Came Back For You
Sorry, was there only supposed to be one Kim song on my list? Because if Queen [email protected]#$ was her blasting into a room telling the tricks and dicks who their ruler was, this track is her standing back up and shitting on the fucking throne. This track is post Biggie’s death, post Junior M.A.F.I.A. and post Diddy. so ALL KIM. Here she’s relaxed, confident, and slightly appalled that she even had to remind bitches who the queen is. The track was produced by Kanye, so the boys can feel free to love it too. And the fucking sample in the beginning?? “You’re just a collard greens and cornbread baby, if anybody knows – I KNOW.” This cut is immaculate bravado at its fucking best.

5) The Time – Gigolos Get Lonely Too
Oh i love The Time, how I love The Time, The Time, The Time. Morris Day’s theatrics, the 80s synths, the energy of the band, the haircombing, the coatdropping. On here Morris drops the games and cock and gives us his heart. Did you ever imagine that gigolos got lonely? He brags about his money, but says it’s not enough. Tells of alllll the women he has, but claims that he just needs one. I don’t know if my bruised heart can actually believe him, but it sounds good. He sounds hurt, a bit desperate. And I kind of want to love him because harlots need love too. Get into this if you want to hear the closest thing to a pimp crying.

6) The Knife – Colouring of Pigeons
If there’s ever a song I want to listen to with Molly in a dark room, it’s this one. When it’s on, I close my eyes and so many visuals roll through my head that one time I kinda frightened myself. Another time I was driving on an empty highway and terrified myself again. It’s so deep and expansive and giving, I just want to lie in it. I’ve never even listened to it with anyone because I don’t want their energy to fuck up my moment. Perhaps the man I should marry will be the one who gets this with me. Or at least leaves the room when I come. Yahh?

7) Laurie Anderson – Gravity’s Angel
I first heard this track within an Alvin Ailey production, so imagine experiencing this front row in a cavernous theater with the world’s greatest dancers punctuating each note and emotion. I was captivated and still am. I love the gentle urgency of it all. I love the words: “The higher you fly, the faster you fall. Send it up, watch it rise, see it fall.” I love the 1980s all over the track. I love that fucking bell. This song is triumphant and powerful in the most feminine way. The things Laurie does with her voice and those odd instruments she invents is so hypnotic.

8) Prince – Something In the Water (Does Not Compute)
Out of Prince’s entire catalog, this one is my sleeper hit. He’s such a fucking jerk on it! “Some people tell me I’ve got great legs, can’t figure out why you make me beg. You think you’re special, but so do I.” Oh really, mothafucka?! I mean, he’s so juicing his sexuality and confidence and putting it in a glass, I live for Prince on this. It’s like someone hurt him, he put on a song that makes him feel like the KANG and then recorded this as a “FUCK YOU.” But he still wants her, and that’s sweet. It seems that he’s met his match in this woman and has to remind her why she should worship him as everyone does. By the end of the track he’s fucking screaming and I’m done. Just all juiced out.

9) ESG – I’d Do It For You
This song SLAYS me. Slay bells ring, are you listening?! The vocals are just bloody murder. This bitch just sounds like she’s willing to do whatever. What is that effect?! Tie it to my throat! And when the beat drops, I fall on the fucking ground every time. It’s so fucking funky and sick, I can’t survive around it. A good friend just recently sent me ESG’s entire catalog and to be honest, it’d be easier for me to choose which songs aren’t absolutely disgusting. If I had to be reincarnated, I’d want to come back as one of the Scroggins sisters. Please, Buddha, please.

10) Robin S – Show Me Love
There isn’t a better song, period. I must have heard this song on my House-addicted aunt’s hip too because it’s so much a part of me and I don’t even know how. Is it the words? Yes. “Heartbreaks and promises I’ve had more than my share. I’m tired of giving my love and not getting nowhere, nowhere.” The track is so sick too, just on its own. Pure dance magic. Any version, any time, I don’t give a fuck. If you put this on, I’m dancing, I’m singing, I’m demanding some stranger to goddamn show me love.