A nicely hidden Korean place, 10 meters away from Falguière place, nice and quiet.
It’s unsuspected and I thank the person who told me about it.
That day at lunch, I only see positives: nice greeting from the Korean boss who spoke rather good French (not always the case in Korean restaurants)- at least in  person, on the phone it was a little more complicated:)- the seats are nice, it’s good, homemade, the prices are reasonable, authentic, warm-hearted, a nice little restaurant.

The owners, a couple, ran a restaurant near the Eiffel tower for 5 years, then decided to come and set up shop here 2 years ago, mostly for the space ( they can accomodate 60-80 people thanks to the big room in the basement).
It was a couscous restaurant before, but they changed the decoration:  the set up is rather nice I think, the tables are high and big, the chairs comfortable, there’s space for everyone. 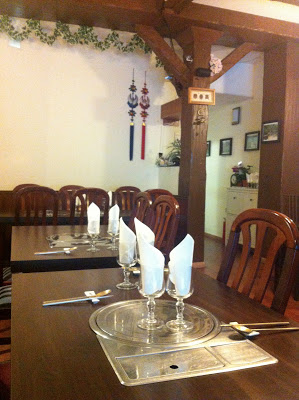 I’ll point out that I came at lunchtime during the week and that it was quiet, and we were the last two clients to come in. So we didn’t get to see what it looks like on a Friday night full with 60 Koreans in the room below:)<br/That being said, it doesn’t mean we can’t be positive from what we saw at lunch that day.
The boss:
-was very nice
– made sure recommendations
– was at ease talking food, to explain their specialties, what their Korean clients like
It’s her husband that is in the kitchen.
I had a coup de coeur for the greeting.

There are table d’hôtes at lunch and dinner, at night it’s 25, 30 or 35, so the prices are a bit higher.
At lunch it was 13 euros for an appetizer-main-dessert menu with the pork  and 15 euros with the beef.
With our meal we took a ginger tea, on the boss’ advice when I asked her what she drank when she at. Good, not crazy, but it’s nice. 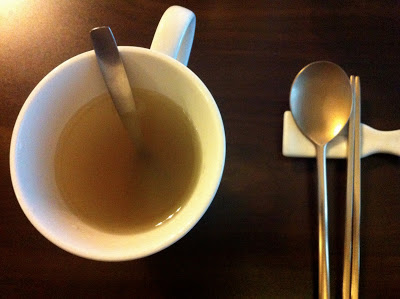 Appetizer
Homemade pork and vermicelli ravioli, delicious, nicely grilled.
Its only weakness is the salad that has nothing to do with the “shmilblick” and covered with a store-bought sauce. We mentioned it, because in my opinion the ravioli would have been better served in a smaller plate without the salad.
On one side you have these tasty ravioli and on the other this salad that went terribly wrong somewhere along the way. 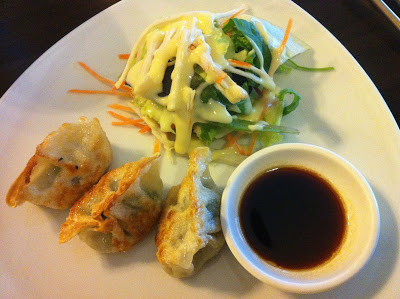 Mains
The lady recommended that I take a beef barbecue, usually I avoid the Korean barbecues because they’re good but not great, but this time I decided I would follow her advice.
I want to point out that we were also recommended the bimbimbap which is served warm, as well as the thin sliced pork barbecue, which apparently Koreans enjoy very much when they come here.
Special mention for the kimchi, which is often failed on the cheap table d’hotes in Korean restaurants, looks more like coleslaw than anything else,  one that came right out of a box from the fridge.
Here, we chose to take a little, but they all held their own: the zucchinis are crunchy, the soy well seasoned, the potatoes hard and soft at the same time.

The boss had time so she cooked them herself. Very good.

The barbecued pork is brought warm. Same thing, the person with me was very satisfied. 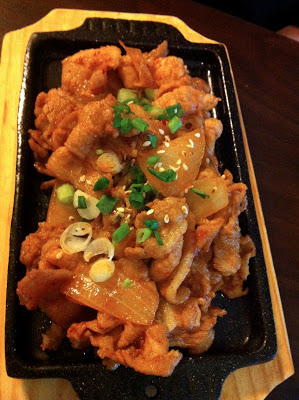 Dessert
The fruit is a bit cold, because they just came out of the fridge, but I think it’s a nice dessert option to offer fresh fruit.

Among various Korean restaurants in nice neighborhoods, I had a coup de cœur for this one : the authenticity of the greeting and the food, the discreet setting, the openness to non-Korean clients, I liked all of it.
I don’t know what Korean clients think of it, or what Korean food specialist think of it, but it’s definitely a good 716 deal.