Mehdi, the creative man behind the record shop Godspill, is our special guest.
To celebrate this event, we have exclusive Tshirts and silkscreens designed by Mehdi to give away.
Mehdi will choose a silkscreen and the T-shirt depending on your size, and will sent the package directly to your home.
There will be one new question everyday and the 3 winners will be the first ones to send me friday all the good answers.
1) Monday : In which city was born Mehdi ?
2) Tuesday : Where does the name Godspill comes from ?
3) Wednesday : What is the “Jazz Noir” track in the playlist ?
4) Thursday : Whose diary is mentioned in a track which featured on the first record Mehdi drawned ?
5) Friday : Which mythical animal did Mehdi draw on that first record ?
Answers mut be sent to me with your names and adresses → here 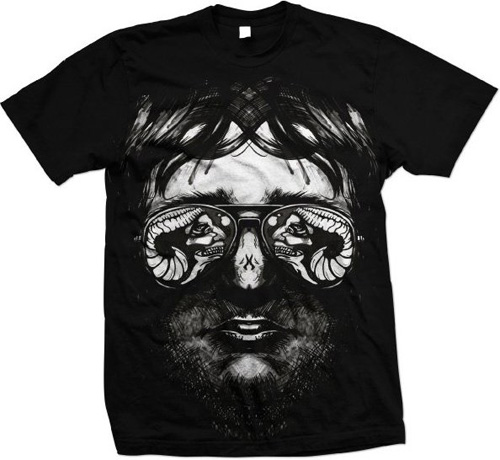 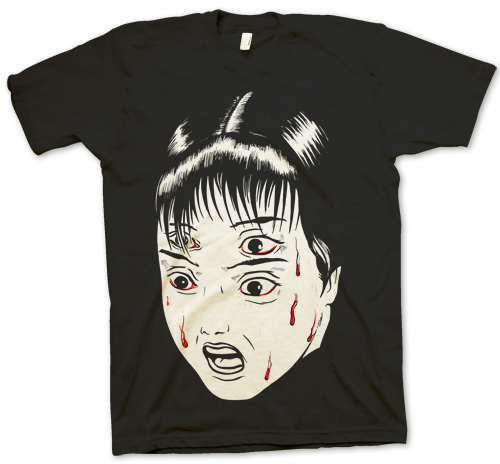 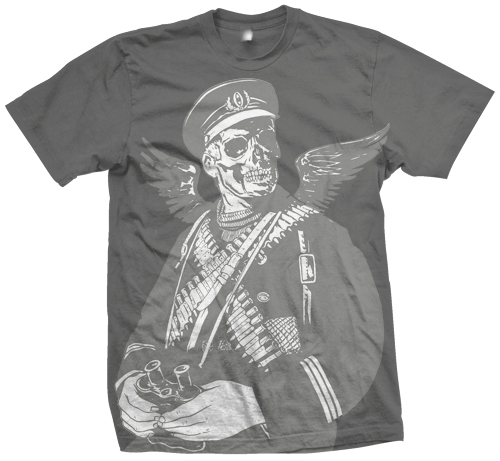 Interview
Mehdi was born and raised in Alger and moved to Holland in his teenage years.

1) What’s Godspill ? an online record store ? or more than that ?
Ok ! Let me tell you how it started.
At first I was working as an artist exhibiting my work. Paintings mostly. At some point I decided to make t-shirts as an extra to sell during the exhibitions. That went well and soon through a mutual friend I was introduced to Jeroen Van Der Star / Global Darkness (who had just started the label Crème Organization).
He contacted me to design sleeves for his label. Having the same background in the Punk & Squat scene in the Hague and loving bands like Infest and Drop Dead for example, we had the same love for darker, raw, uncompromising, & provocative designs. So I started drawing for Crème. I think the first one was the Bangkok Impact – traveler release that got really good feedback. I also started making t-shirts usually for the artist who were released. At some point I did not have a distribution for the t-shirts I was making ( I was selling them at parties first) so I decided to start my own shop (Godspill). A year or two later some of the labels who had stock left gave me the possibility of selling their stuff. It added an extra to the shop and now Godspill is a small vinyl records mail-order. I also distribute Bunker Records.

2) When Godspill has been created ?
Officially since 2001. As an artist at first but now also as a vinyl mail-order.

3) What’s the link between Godspill, CBS now called Intergalactic FM, Clone, Viewlexx, we sometimes feel they all belong to the same big hollandese planet.
This is a secret. I would have to kill you if I told you. But… if you insist. We usually meet in a small basement every month to drink coffee and talk about history facts or brainstorming about our Dutch government policies. The music is just a background thingy.

5) Why did you choose the name of Godspill ?
If I remember well I had to make my business official and had to come up with a name really fast. Gods Pill is my way of saying “I would like to surpass myself” (being the idiot I am). “Get some of that pill boy, and achieve great things”
Does this make any sense?

6) What is the link between Godspill & Crème organisation ?
For me Crème O. was the introduction I needed to be able to work with the WestCoast Scene. Although I already knew Guy Tavares/Bunker Records (I recorded my first punk band at his studio), I did not have a way to make drawings for others except my band.
Again, TLR understood that the Hague scene was different then other scenes and that, appropriately the visuals used on sleeves or t-shirts should reflect that. Something Guy Tavares was already doing with his black sleeves and WW2 memorabilia fetish.
Maybe a good read would be this article that Zero-inch published about Bunker Records.
There are probably many more online. Google it!!

7) what is the actuality and the future of Godspill ?
Well right now I am working together with Jeroen van der star on the vinyl shop.
We are also organizing the distribution of Bunker Records and actually something huge is coming up ;-). Everyone who loves the weirdness of this label should subscribe to our mailing list on Godspill.net.
Probably before the end of the year we will get some help for the mail-order that will give us a little bit more time to focus on our personal work.
I am actually working on a new site for my artwork and planning a few exhibitions. Something I was not able to do for a few years now. I am very excited about this. I guess it was a good thing to take some distance from what I was doing 6 years ago. It gave me the possibility to see everything in a better perspective so I think I am ready (again) to make some serious artworks haha !

8) Is there something you would like to add ?
Oh yes. Did I mention that you should listen to more good music? Dig into your parents vinyl collection or better if you don’t own a record player just go to IntergalacticFM and join the club.

1) Motorhead – Iron Horse/Born To Lose
Lemmy. Because we are all born too lose. Point taken boss!!

2) Dengue Fever – March Of The Balloon Animals
I don’t know about this one but it sounds weird.

3) Dead Bolt – One Day I Will Kill You
Serial killer country/rockabilly from the nineties. Everyone were scared of this guys.

4) Demon – Night Of The Demon
Awesome hardrock from the seventies. Somehow they did not have much succes with the mob.

5) The Freak Scene – A Millions Grains Of Sand
Great psychedelic song. This is the best version I think.

7) Rick Riddle – Hang On Bill
A song wrote after the My Lai massacre protesting the arrest of one soldier who, apparently only followed orders. This was the beginning of the anti-Vietnam feeling in the US.

8) At The Gates – Suicide Nation
Fucking rocks. That’s it!!

9) Randy Holden – Fruit & Icebergs
For me one of the only true heavy psychedelic album.

13) Wanda Jackson – Funnel Of Love
The latter albums had a beter production and she song with a different voice. But First she made grungy songs like this one. Top !

14) Ramsey Lewis Band – Get Off The Road
Hellcats nobody likes. Well I do baby.

15) The Ghost – Too Late To Cry
A folk band from the beginning of the seventies. This is the only song worth it. The rest is too much hippy folky shit.

20) Country Dick Montana – Indigo Rider
A classic with the lowest voice I know. I am a big fan of country.

20 bis) Art Peterson – Twinkie Insanity
About the murderer of the First gay mayor of San Francisco. His defense was his addiction to Twinkies and the sugar rush he got from that. Another song commentating this event was I Fought The Law And I won by The Bobby Fuller Four. Famous. The Dead Kennedy’s version was about something else if I remember correctly.

20 ter) Charles Aznavour – C’est fini
Desperation. French tragedy at it’s best. We all like to cry and moan about love. Charles was the best at it.